Barbara O’Neal’s books always have 3 things in common: strong women discovering who they are and where they belong; the value of friendship; and a lovable pet who makes the tough things in life a little easier to bear.

Zoe Fairchild returns to her roots, a village in Devon, when her childhood friend goes missing. Reeling with guilt from a rift in the friendship, Zoe is faced with searching for her beloved friend while still dealing with her own childhood trauma. Simultaneously, Zoe’s teenage daughter Isabel is in the thick of a trauma all her own, and has been locking everyone out. Add in a wise, mystery writing Gran, a witchy mother, and the one that got away, and Zoe is in for quite the emotional rollercoaster. Will the moors, forests, and open sea of Devon help Zoe and Isabel open up? 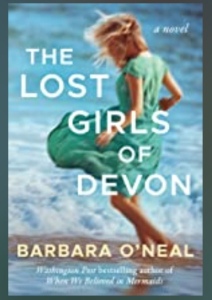 This novel is an engrossing, character driven mystery with themes of trauma, healing, and forgiveness. The complications of mother daughter relationships are set against a breathtaking backdrop of the forests, moors and a quaint and charming village in Devon (that sadly isn’t a real place; I checked!).

The setting is so lusciously described I had to Google early on if it was a real place I could visit, because it’s impossible not to want to go there. I’ve definitely added Devon to the list of regions I hope to visit one day. The landscape is a character unto itself, and rightly so. From the magic of the forests to the inspiration found on the moor, it is the natural world that helps Zoe and Isabel heal and face their pasts.

And the pets! I’ve always had an affinity for animals, and I love books that include them. From the herding dog to the giant cat to the quiet grief that accompanies Zoe despite her dog passing six months before the book begins, the animals are all top notch. At one point, Zoe is thinking to herself about missing her deceased dog, and describes missing him so viscerally and accurately that it brought tears to my eyes thinking about my own beloved dogs that have gone. Quite a lot of the descriptions of her dog, Simba, match that of one of my beloved dogs (who ironically thought he was a lion due to my The Lion King obsession!). Though I could especially relate to that storyline, the way the person-animal relationships are described is on point and will be a blessing to all the animal friends out there.

Trauma is a delicate subject, and there are multiple storylines involving it. Both the healing process and the role of the therapy are portrayed delicately and well. It is treated as the tender topic it is, and isn’t used solely to further the plot. We all bear scars from our past; Zoe’s former trauma and Isabel’s current one show just how long the healing process can be.

I just fell head over heels in love with this book. The writing is superb, the dialogue realistic, and Isabel’s character portrayal is loving and realistic. Teens often get the short end of the stick in fiction, but Isabel is a character in her own right and is treated with respect. I love her character arc, and how all the teens are portrayed.

This book is just wonderful from start to finish, and I can’t recommend it highly enough. I always read Barbara O’Neal’s new releases, as she reliable creates such wonderful worlds and characters that I can’t help but jump in to each new release. I’m grateful to Net Galley and Lake Union publishers for an advanced copy to read such that I could write this review.

Two former child stars with a complicated past move from Hollywood to home in Erin Hahn’s Built to Last.
I’m still in shock that I was selected for this honor! Thank you, Wado ᏩᏙ to @weneeddiversebooks! I’m so thrilled to have been selected, and alongside my friend and the incredibly talented @kkdstewart! I cannot wait to see the incredible works that come from this grant. Congratulations to my fellow recipients!
What if your ex wrote a screenplay about your breakup? Even the most secure of people would experience some kind of anxiety over that. In Andrea J. Stein’s Typecast, this scenario sends preschool teacher Callie spiraling into her past. It does more than dredge up the past; it makes her question everything about the path she chose. If she could ponder those decisions on her own, maybe she’d come to the right answer. But add in a sister on bedrest, a nosy niece, and involved friends, and Callie feels more lost than ever.
It’s a beautiful day to vote!
Happy Halloween from Harry Potter, Link, Mickey and Minnie, and a dragon!
I always know I can count on Kelly Harms for a great story in a gorgeous setting, and her latest novel Wherever the Wind Takes Us doesn’t disappoint in any regard.