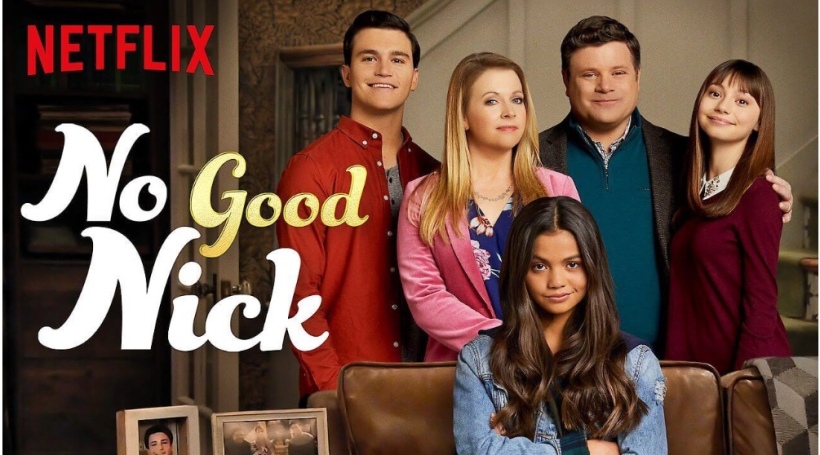 I’m a member of the OG TGIF generation. Call us Gen X or Millenial or whatever you want, but when it comes down to it we are what we watched, and we watched TGIF. Family Matters, Boy Meets World, The Fresh Prince of Bel-Air, and Sabrina the Teenage Witch shaped our weekend plans. Mr. Feeny taught us how to be good humans and Will Smith made us laugh and cry, while Sabrina stoked our imaginations as we wished we, too, could have a talking cat.

So when I, an avid TGIF viewer, saw that Melissa Joan Hart of Sabrina fame was in a new Netflix show, I knew I would watch it. No Good Nick follows a teen con artist as she sets her sights on a particular family for reasons the audience is going to suss out over the next season of episodes. I’ve now watched the entire series, sadly all of it, as Melissa Joan Hart shared on Facebook that Netflix did not renew it for a second season.

The show is a sitcom at first glance, but has a complex storytelling style and arc that I appreciate. When we first meet Nick and the Thomspon family, we know she’s conning them. But as the show progresses, the villain and the hero kind of switch. We see the Thompson’s perspective first, and then learn Nick’s motivation and see her perspective. It’s a unique storytelling perspective that you don’t often see in sitcoms; it comes across as a dual narrator novel in visual form.

It’s a great show for the whole family to watch together, with Nick struggling with her conscience and new lifestyle. It opens a lot of doors for discussion, especially with kids of a later elementary and older stage of life. From dating woes to family conflict, this show covers a lot of ground without doing it in a preachy way. It’s really well done from top to bottom.

I’ll admit, at first I only passively enjoyed it. I’d watch it while folding laundry or doing another activity, to help entertain me while I did something monotonous. But as I got deeper into the season, and especially with Part Two, it became a show I’d just sit down to watch. As the season progressed and the characters grew, as did the plot, I even got a little bit addicted to it. As Nick pushes the envelope further and further, it gets pretty nail biting suspenseful for a sitcom! Even after just hearing one part of the last few episodes, my husband commented that whatever I was watching sounded intense, and he was right. It does get intense.

There is one storyline in particular that I really appreciated how they handled it. I’m going to share what I can without letting any spoilers slip. Two characters, often at odds with each other, find common ground when one finds out a secret about the other. Instead of using this secret- someone’s sexuality- against them, it is left private. Regardless of whatever circumstances could cause this information to be weaponized, it never is. This message is so incredibly important, especially for kids who often, when hurt, have the impulse to hurt back. That some things are untouchable, even when provoked or angry they must be left alone, that is a truly valuable thing. I loved the way this show introduced such a heavy concept without weighing the plot down. It is just a part of the character, and not a message.

While all of the young characters are really well and thoroughly developed, there are a few stereotypes and areas I found lacking. The lackeys our con artist uses are definitely of the stereotypical variety. Most disappointingly, the parental characters are kind of underdeveloped. Many sitcoms aimed at younger audiences often make jokes of the parental characters, and this show did skew that way a little. As the season progressed, so did their character development.

I’m disappointed this show won’t be getting any additional episodes. By the end of the first season, things are suitably resolved and yet there is still more to explore. I’d have especially enjoyed seeing the characters grow and change in this new world where they’re more self-aware of their actions. I especially would have enjoyed seeing more of the adult characters and how this impacted their life choices, as well as seen the creators expand from the at-odds relationship to a true partnership. I, for one, am tired of the arguing parents trope where one is always good and one is always the bad guy. I would’ve enjoyed watching these characters grow and change, instead of always being stuck in a first season development stage.

Have you watched Netflix’s No Good Nick? What did you think?