Never fear, there are no spoilers here!

2019 is basically the year of Disney epics. First Dumbo in March (which, confession, I haven’t seen yet), Aladdin landed last weekend, and this summer is bringing Toy Story 4 and The Lion King (excuse me while I squeal uncontrollably while jumping up and down), and fall is heralding in Frozen II. So it’s kind of a big year for Disney, and their fans.

I was a little apprehensive about this Aladdin remake. I was more than a little worried it would be like the Beauty and the Beast revamp: a scene by scene copy, with the new scenes being uber depressing. Plus, with the preview’s for Aladdin including an, uh, interesting take on the Genie…I was just a little bit worried. Here’s the trailer, in case you haven’t seen it.

I needn’t have worried, as the new live action Aladdin is spectacular. While the film stays true to the essence and core of the characters and story, it also dove deeper and explored everything a little bit more. I was worried about the 2 hour 8 minute run time, but it really didn’t feel too long. 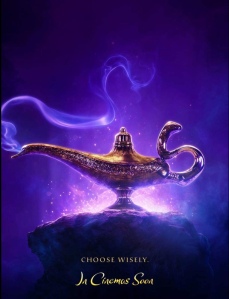 Concern #2 I had was about the Genie. After all, the original role of the Genie was built around Robin Williams. And how could anyone live up to that?! But Will Smith really put his own spin on it, while staying true to the character. I’ll admit, I was skeptical about the hairstyle they chose for him. But when even the characters joke about it, it takes away the need to analyze every little thing without breaking the fourth wall. Smith’s delivery of some lines had me rolling with laughter.

Each actor does an absolutely incredible job. Aladdin himself delivered a wonderful performance, honoring the original character and adding his own flair. And Jasmine- oh, Jasmine might be my favorite (just like in the original!). Her motivation is deepened, but realistically so. Her new song, “Speechless”, has been stuck in my head for days. It’s a powerful anthem that is akin to Frozen’s “Let it Go.” It gives the audience a better understanding of who Jasmine is and why she wants what she wants.

Another risk with these live action remakes is the animal sidekicks. I mean, how many tigers do you know that you can trust with protecting a princess? But both Raja and Abu are well rendered in CGI, and act in a way that’s believable for actual animals. Abu is adorable, Raja still makes me want a pet tiger, and Carpet is still a fictional character unto himself (herself? That’s not really made clear.)

Many plot holes are resolved (why can’t Jasmine leave the palace? How does no one recognize Aladdin once he’s Ali?), and a few new storylines are added. The addition of Dahlia, Jasmine’s handmaiden, brings humor and gives Jasmine someone to talk things through with.

The music and dancing are out of this world, with a great mashup of Bollywood and break dancing. It’s such a fun mix, and coupled with the extravagant costume design, these lavish scenes are a feast for the eyes. These scenes are visually appealing, further the plot, and are reminiscent of our favorite animated sequences.

As far as kid-friendliness, there are only a few scenes I’m worried my little ones will struggle with (they’re 3 and 6). There’s the initial Cave of Wonders failure on Jafar’s part, where someone goes in and doesn’t come out. Shortly thereafter, Jafar pulls a ‘this is Sparta’ move, and that’s another violent part. The only other area I’m concerned about it is the finale, very similar to the animated version, in which some of our beloved characters are suspended in the air, with Jafar in control of them. Outside of this, I think it’s entertaining enough without being scary to hold their attention. But I may still wait until it comes out on disc to show it to them. After all, I need a good reason to buy it!

Jasmine Warga’s A Rover’s Story is a gorgeous combination of science and imagination that takes readers on a unique and engaging journey.
It isn’t every day your kid turns 9 and 3/4, so we had to do a special afternoon with treats, music, and a movie to celebrate!
Pretty flowers that I *didn’t* kill!!
The promise of fall is here 🍁
Fresh haircut + gorgeous weather = back porch selfie 🤣
Lizzie Blake is a bit of a mess.