My deep love for tacos runs deep and fierce. Since I also love Costco, when I heard the rumors they were selling street taco kits I knew I had to try it.

We checked if our local Costco had it on our weekly shopping trip, and sure enough they did. The $16 price tag isn’t as inexpensive as our typical prepared food options, but we wanted to try it and when you think about it, $16 for a family of four for at least one meal isn’t too bad.

What I didn’t check in the store were the directions, which were minimal. “Heat chicken and tortillas to 165 degrees. Top with condiments.” How am I meant to heat them? In the oven? A skillet? A microwave? I need very precise directions on things I’ve never made before.

We decided to heat the chicken in a skillet. We put it on medium low heat, used one of the lime wedges to toss it with lime juice, and warmed it that way. Then we warmed the tortillas as we were ready for them in the microwave.

We layered the chicken, cabbage, and cheese in the corn tortillas. I’m more of a queso girl myself, so I tried the cilantro lime crema but skipped the salsa.

Confession: I’ve never officially had street tacos. I come from a Tex-Mex background, and those preferences will flavor my review.

I LOVED the corn tortillas. The chicken was delicious but didn’t stand out in any particular way, it just tasted like taco seasoned chicken. I’m not a fan of cabbage, but tried it nonetheless. Ahem…I’m still not a fan of cabbage, turns out. I was also unimpressed by the cilantro lime crema- it just tasted like a cilantro lime ranch sauce, and I’m also not a big ranch fan. I layered mine with extra cheese and skipped the cabbage and crema on my subsequent tacos. 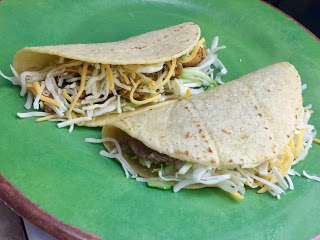 With the multiple dishes used to warm the ingredients, the street tacos kit didn’t particularly save us any time on cleanup like I’d expected. If the warm-able ingredients came in removable foil trays, I’d be more apt to buy again. The ingredients also all intermingled in the single tray, making it difficult to separate the cabbage and chicken for warming purposes.

The kit was still a yummy treat, but not one our family will buy frequently, if at all. The included cheese we already have in bulk in the fridge- I buy it monthly and use it on salads, for homemade tacos, nachos, and even grilled cheese sandwiches. My pickiness rules out the need for the cabbage, salsa, and cilantro lime crema.

Have you tried the new street tacos kit from Costco? What did you think?

Brandie June’s novel, Gold Spun, absolutely swept me off of my feet. It’s a whirlwind of a book, a Rumpelstiltskin retelling that is perfect for fans of fairy tale retellings!
The Cutting Season was an intense read, with layers of history, suspense, and Louisiana lore expertly interwoven to create a book you won’t want to stop reading.
Tess Little’s The Last Guest is a provocative mystery dripping with intrigue, perfect for armchair detectives.
Homeward bound ❤️
The beach and playing in the Pacific really tuckered these kiddos out! Archer even tried to take a nap in the sand 🤣
It’s a reading on the beach kind of day- my favorite kind!