Skip to content
October 23, 2015 pawprintsinthesink
Disney fans have been treated to more screen time for Girl Meets World star Rowan Blanchard.  I love this girl! She’s adorable and a great actress and seems like exactly who I would’ve wanted to be friends with when I was a young teen. She delighted her fans with her role in the Disney Channel Original Movie, Invisible Sister.

Her character in Invisible Sister is quite different than Riley on GMW. As a chemistry prodigy, Cleo feels isolated from most of the other students in her high school. Her older sister Molly seems to have life mastered, as a popular athlete with lots of friends. Cleo feels constantly eclipsed by her sister, which Molly can’t understand.

What I love about this movie is that Molly isn’t a villain, or even an antagonist. The only person standing in the way of Cleo’s happiness is Cleo. Molly is often reaching out to Cleo, inviting her to be friends with her friends. But Cleo is too afraid of being the plot of a high school movie where the nerd is mocked by the cool kids, and always turns her down. When the boy Cleo likes shows interest in her, she assumes he’s only doing it to make fun of her, since he’s a jock.

When Molly accidentally ingests Cleo’s science project, which turned a moth invisible, she herself turns invisible. The only person who knows about the experiment is Cleo herself, thus they must keep Molly’s condition a secret. With their parents conveniently out of town for Halloween weekend, Molly has Cleo dress in Molly’s costume to pretend to be her. With an important field hockey game that afternoon, Molly has to be in class to be allowed to play– even if it’s really Cleo just pretending to be her. This provides the perfect avenue for the girls to walk a mile in each other’s shoes, and discover that each one’s life is quite different than how the other perceived it. 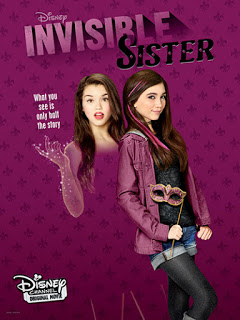 I love the focus on sisterhood and building each other up. Sometimes you have to see the world through someone else’s eyes to better understand yourself as well as them. Molly and Cleo got to do this, and discovered how deep sisterly love runs.

The young actresses do a great job, and it’s a great October movie. It has some mystery, dark nights in New Orleans graveyard for suspense, and some mystical happenings–even if they are attributed to chemistry, invisibility is indeed mystical.

You can still catch Invisible Sister on Disney Channel and the Watch Disney app. Have you seen it yet? What did you think of it?

Jesse Q. Sutanto’s Well, That Was Unexpected is a YA rom-com that hits the mark perfectly.
Jasmine Warga’s A Rover’s Story is a gorgeous combination of science and imagination that takes readers on a unique and engaging journey.
It isn’t every day your kid turns 9 and 3/4, so we had to do a special afternoon with treats, music, and a movie to celebrate!
Pretty flowers that I *didn’t* kill!!
The promise of fall is here 🍁
Fresh haircut + gorgeous weather = back porch selfie 🤣