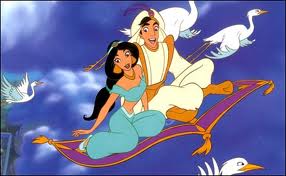 I’ve loved Aladdin for as long as I can remember. The jokes, the characters, the animation, the actors—all are terrific. Robin Williams? A pet tiger? Yes, please! I’ve even dressed up as Jasmine for two Halloween costumes of my life (once as a child and once as an adult). Beginning back with the Pocahontas chapter, we’ve officially re-entered my childhood and simultaneously the Disney animation Renaissance.
The Disney animation Renaissance began in the mid to late 1980’s with The Little Mermaid. Ariel and company brought the Disney animation department back to life. These grand Broadway numbers were made even more unbelievable and jaw dropping when done in animation—where there are truly no limits. Talking candlestick? A Jamaican crab? Hamlet in lion-form? Why not?! This ‘renaissance’ or resurgence in the popularity and quality of Disney animation propelled through the mid 1990’s, with Mulan rounding out the Renaissance and a new competitor officially in town and exceling (Pixar animation studios). With the increasing popularity of CGI animation, Disney started using that technology more and more—but on their own terms (see the Tarzan chapter for reference—a new kind of technology called ‘deep canvas’). But alas, we should be back in Agrabah by now.
Although Genie is typically a favorite character, my favorite characters are Jasmine and Raja. Jasmine is a favorite because she stands up for herself and refuses to become shallow, despite the clearly luxurious lifestyle she’s been accustomed to. Despite not knowing how the real world works, she runs away to it anyway. She’s brave and smart, while also being beautiful and kind. We see her courage and intelligence during Aladdin’s battle with Jafar; she tricks him into thinking she was spellbound into love, allowing Aladdin to progress through the chamber in order to attack Jafar. She keeps the ruse up well too, even saying she loves the ‘gaps in his teeth’. I shudder every time I see that scene, because she is so good and he so evil. He isn’t just greedy; he’s power hungry and willing to kill to get it. We see him not react at all to Gazeem’s death except to mourn the fact that he still doesn’t have the lamp.
My other favorite character is, of course, Raja. Unlike Abu, Raja isn’t jealous of Jasmine’s affection towards other people or animals. Raja loves Jasmine and protects her, yet also lets her go in order for her to feel free. Plus, Raja’s a tiger. That’s just awesome. I already have a soft spot for tigers, and Raja is such an exceptional one that I particularly have one for her (him? I’m not really sure of Raja’s gender).

I like Aladdin, I do. He’s kind, he’s funny, and he’s romantic. He likes Jasmine for more than just her beauty. He isn’t a boring Prince Charming, helping sweep the Princess off her feet by saving her. He’s met her, he empathizes with her, he loves her for who she is—before he finds out she’s royalty. He also lies, even after he’s already been caught lying. So while I like him, I’d much rather watch Jasmine and the Genie. What’s funny, and that I never realized until watching the special features, is that the actor who voices Aladdin is the same actor who played Steve, DJ’s boyfriend, on Full House. I watched a lot of that show growing up, but never equated him with Aladdin. Of course, I can hear it now that I know about it!
On to the real star of the show, the Genie—of the—Lamp! Robin Williams wasn’t just asked to be the Genie, he was wooed. The animators watched his stand-up comedy act, animated it as though the Genie were doing it, and showed it to him. Of course, how could he say no after that? He really made the movie funny, leaving the directors and producers with over 16 hours of improvised sound recordings related to the film. He also started the trend of famous actors voicing animated characters. I never knew that he was the voice of the merchant at the beginning of the movie until I watched it for this project. I’ve watched the movie hundreds of times throughout my life, yet I never caught that.
Alan Menken, Howard Ashman and Tim Rice composed the music and lyrics for the film. Alan Menken and Howard Ashman are part of the force that spurned the Disney Renaissance, having written that iconic music for The Little Mermaid and Beauty and the Beast. Sadly, near the completion of Beauty, Howard Ashman passed away. I still get tears in my eyes when I see the dedication to him at the end of that film. Thankfully for us, he and Alan Menken had already been working on the music for Aladdin, so we still have some of his work. Due to a story shift, some of that work is not in the final cut of Aladdin. Lyricist Tim Rice joined the team after the story shift to add to what Alan and Howard already had.
“A Whole New World” is, of course, my favorite song. It’s beautiful on its own, but it also involves travel (which I love) and humor (who doesn’t love a laugh) while also allowing the love between the protagonists to grow. Aside from that, it’s the song I find most relatable. Seeing as how I haven’t discovered a genie, stolen anything, or turned villainous, it’s the song I most relate to.
I’ve always moved around a lot and can say I’ve called four wonderful states home (Oklahoma, Indiana, Florida, and Alaska, in chronological order). Due to the contrasting climates of these places, I always felt like I was discovering something new. I feel like this most applies to my current state, Alaska. On every walk or drive, some new amazing thing sparks my interest. Unbelievable mountain vistas, thawing lakes, ducks hanging out on frozen ponds, the reindeer farm, seeing moose in our front yard—all of these are amazing new experiences I feel are unique to Alaska. Alaska is the most different than the other places I’ve lived.

Change isn’t always easy to cope with, and our move to Alaska is the most difficult time I’ve ever had with change. Although I’m ready for spring and we still have snow on the ground, I can say I’ve genuinely enjoyed our time here. I’ll continually enjoy our time here, because it’s rather hard not to. The sheer amount of trees and nature make it difficult to be too unhappy. The sun may set early here during the winter, but it’s often sunny during the days and it makes up for during our 18 hours of daylight time during the summer.

Ah, summer. So close, yet so far. I, for one, am ready for green grass between my toes, the scent of flowers in bloom, and the feel of the sun on my arms—while I’m outside. Currently I can often feel the sun, but I’m in my car or house or wearing a coat because it’s still rather chilly out (yes, 40’s is officially chilly, 30’s and below is cold. Though when it’s been -10, 20 feels like a heat wave). Aladdin warmed me up, reminding me of heat and warmth (how could a desert not? Well, other than the one scene with snow). Now I’m ready for Alaska to follow suit and melt all this snow away. I think Aladdin, Jasmine and the whole crew would agree with me: we’re ready for summer! (Well, if they lived here. Summer in Agrabah is probably really, really hot.)